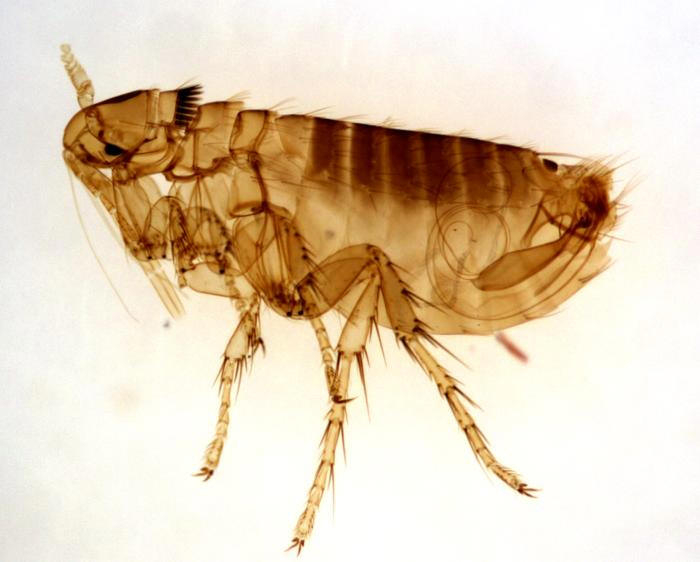 Fleas are blood sucking insects belonging to the order Siphonaptera. Fleas are thought to be closely related to Diptera(True Flies). Although ectoparasites the wings of fleas have been lost during their evolution but it has been suggested that muscles that may have been used for flight are now used to power the well developed rear legs. The rear legs arise from the metathorax and this area is well developed as a consequence of this. In contrast to Anoplura fleas are flattened laterally allowing them to travel quickly through host hair. Morphological adaptations other than lateral flattening include recessed antennae-long antennae would only serve to obstruct a fleas passage- and backward pointing setae, these anchor the flea against surrounding hairs if attempts are made to remove them. Many species of flea have a particular arrangement of setae on the thorax which are called combs. Fleas lack compound eyes but do posses ocelli on either side of the head, although some species do lack even these, eg Leptopsylla segnis-the house mouse flea. Sexes can be distinguished by the presence of complex copulatory apparatus on males. These apparatus are situated to the rear and ventrally and in addition to males having a pronounced curvature of the ventral surface opposed to a flat surface in females these features serve to sex fleas.

Fleas are important from a medical view point because they transmit harmful pathogens from animals to humans.These pathogens cause plague and murine typhus although as these are of medical importance rather than veterinary they will not be discussed here. In the case of Spilopsyllus cuniculi, the rabbit flea transmission of Fibromavirus myxomatosis (myxomatosis) has been a advantage in attempts to control rabbit populations. Combined with the production losses caused by pathogen transmission is that seen in the sticktight flea which, if present in large enough numbers can cause anaemia and emaciation in poultry. This is often combined with reduced egg production and if infestation is particularly heavy then death of birds will result, especially those that are young or old. The sticktight flea is not a active jumping flea rather a burrow in and stay flea. Fleas have a less specific range of hosts than Anoplura and Mallophaga which increases the chance of pathogen transmission.

Fleas can be divided into three superfamilies, the Pulicoidea, Ceratophylloidea and the Malacopysylloidea. Most fleas of medical and veterinary importance belong to the superfamily Pulicioidea, including the human flea Pulex irritans which normally parasitizes pigs. Fleas of veterinary importance are Echidnophaga gallinacea known as the sticktight poultry flea (mentioned above), and Ceratophyllus gallinae also a poultry flea, this flea parasitizes many other bird species as well as poultry.

The life cycle of fleas differs from that seen in both lice orders. Fleas are pterygotes and are placed in the Holometabola (insects that undergo metamorphosis during their life cycle)group. Typical life cycle is egg-larva-pupa-adult. A flea does not attach its eggs to the host and the larvae develop away from the host, usually within the hosts nest or burrow. Eggs are quite large in comparison to the female, being approximately 0.5mm. A female flea will produce and lay between two and six eggs a day. These are oval and off-white in colour. The total egg production of female fleas differs with species and conditions the number usually quoted for Pulex irritans is around 400 eggs in a life time. Eggs are laid either on the host and will then fall off or they are laid directly in the bedding material. If there is a relative humidity above 70% then eggs of most species hatch within three to six days. Eggs are susceptible to desiccation and if relative humidity falls below 70% egg mortality will become greatly increased. From the egg a maggot type mobile larvae hatches. The larvae will burrow into the nesting material to feed on organic material and to avoid predator insects in the burrow. In a domestic setting such as a house or heated out-building fleas can quickly increase in population size and become extremely annoying and possibly destructive to weak poultry. The larva are vermiform (worm like) and measure between 3-10mm in length when fully developed. Most species have three instar stages and larvae feed on organic matter such as sloughed skin from the host. Another food source of larvae is dried blood, this is provided by adult fleas that feed on a host and then excrete undigested blood. This behaviour could be classed as altruistic as there is no way for adult fleas to ensure that their offspring only will receive these blood meals. At the third larval stage a thin silken cocoon is weaved. Emergence from cocoons is closely correlated to relative humidity and desiccation is the main cause of mortality at this stage in the life cycle. Ambient temperature also effects emergence from cocoons with almost none occurring below 100C. Another adaptation of a fleas life cycle is that pupae will often not hatch unless an environmental stimulus is present. Research has shown that in Ctenocephalides felis the cat flea, pupa hatch very rapidly in response to vibration. This mechanism allows the pupa to remain dormant until a potential host approaches. Young adult fleas will then emerge extremely quickly from their silken pupal cases and jump immediately onto the nearby host.

Young adult fleas within their silken cocoons need to be able to escape the confines of their development compartment. To enable this a structure on the head called the frontal tubercle projects outwards and allows the fibers of the cocoon to be teased apart. The time spent in a cocoon can vary from one week to around twelve months and it is this factor that plays an enormous part in maintaining flea populations over periods when environmental conditions are unfavorable. Adult fleas when living in ideal conditions are able to live for a year or more.

The two most common fleas of veterinary importance are Ceratophyllus gallinae and Echidnophaga gallinacea. Both these fleas are parasites of domestic poultry. C. gallinae is the most common of the two and if excessive numbers are allowed to occur anaemia can result. C. gallinae will also bite humans and household pets and therefore can become household pests if not properly eradicated. Female E. gallinacea- the stick-tight flea- usually burrows into the comb or wattles on poultry following fertilisation. A nodule results from this activity and within this nodule the eggs are laid. Once hatched the vermiform larvae exit the nodule and drop onto the substrate where they feed on organic debri. The burrowing into and subsequent emergence of larvae cause pathology to the skin tissue and can result in areas of ulceration. This can easily lead to secondary bacterial infection and with heavy flea burdens death can result. The stick-tight flea can occur at densities of over one hundred individuals per bird all concentrated around the head. Although difficult to determine it is probably best to assume that any infection is detrimental to egg laying or weight gain and so immediate action on discovery of this insect is the best policy. It is also worth noting that Echidnophaga will attack other mammals, mostly dogs, causing nodules around the eyes and between the pads on the paws.